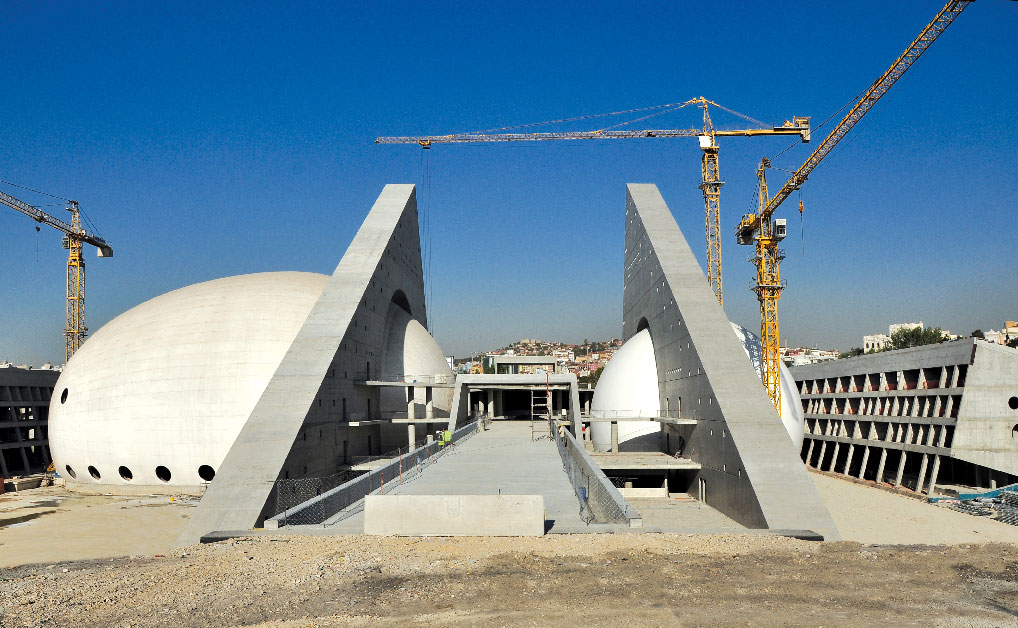 The project is composed of four different blocks and under construction on a land of 154.017 m². While the construction of blocks A, B, C and D was being carried on, very important engineering efforts were taken on block B, which particularly contains two spherical concert halls and triangular foyers. While the two spherical concert halls are being constructed by the balloon technology and the shotcreting method, extraordinary formwork technologies were applied in the triangular-design foyer buildings by MESA İmalat (MESA Manufacturing). Providing a general information about the project, the completion of which has been long overdue, Mr. Kenan Ulu, Technical Coordinator of Çağdan Mühendislik and Müteahhitlik A.Ş. (Çağdan Engineering and Contracting Co., Inc.) drew attention to the fact that they expedited their effort to conclude the construction designed in ‘90s as soon as possible and that they suffered some soil related problems at the foundation laying stage. Stating that following the recommencement of the work in 2010, waters accumulating due to the issue of pressurized water down to the -4m level from the ground were drawn up by pumps to clear the surrounds, Mr. Ulu said that soil surveys were re-conducted, and they prevented pressurized water by the piling method.

A special scaffold designed for the sphere

Stating that the two spherical concert halls, called the Large Hall and the Small Hall, were constructed by applying a special balloon technology, Mr. Kenan Ulu expressed that they produced a solution by taking collaborative efforts with an American firm, one of the leading companies in this field in the world, and with MESA İmalat and that the balloon application was executed by the American firm itself. Underlying that when the shotcreting operation using a special construction moving circularly will have been ended, the concrete thickness would have been 60 cm for the Large Hall and 38 cm for the Small Hall, Mr. Ulu went on to say that the shotcreting operation progressed in layers, with a different steel reinforcement operation for each layer, and that pressurized water was delivered into the balloon until this operation is finished. Stressing that it is a challenging and painstaking process, Mr. Ulu said: “Shotcreting operations have been completed for the Large Hall and we started interior design. One of the most challenging phases of these efforts was the entry of the mobile crane into the hall. We worked for hours on this issue. At the moment, a 60-ton capacity crane is operating in the hall. On the other hand, shotcreting operations are being carried on for the Small Hall. Concrete is being supplied by Oyak Beton (Oyak Concrete).”

Adding that a special mix was used for the shotcrete applied on inside walls of the balloon composing the Large Hall and the Small Hall, Mr. Kenan Ulu expressed that the mix has been applied after it was decided on as a result of meetings attended by American experts, Oyak Beton executives and themselves. Underlying that the special chemicals added into the concrete were brought from the United States, Mr. Ulu said that special particles used for concrete strengthening were added into the mix and that they obtained a concrete whoso strength improves by time. Stating that the earthquake resistance of these structures was checked in design and construction stages, Mr. Ulu added that particularly concert halls and the triangular structure are highly durable against earthquake and that necessary studies have been made. Finally mentioning that a clear dating for the completion of the project would be difficult, Mr. Ulu spoke: “Rough construction has been completed for one of the spherical concert halls and the other will have been completed in a near future. At the same time, the triangular structure intersecting with the two concert halls has been completed by using formworks produced through a special work by MESA İmalat. What challenged us here was the construction of two concert halls and the triangular structure at the same time. MESA İmalat did a really good work.”

A special design of formwork used

One of the most attractive facets of the Presidential Symphony Orchestra (CSO) Concert Hall construction is the triangular foyer buildings intersected by the two concert halls. While accomplishing the production of the formworks used in the construction of these buildings, MESA İmalat employed 3D design and calculation programs. Providing information about the process, Mr. Uğur Gür, MESA İmalat System Formwork Director, said that the circle where the balloon comprising the Large Concert Hall enters the triangular foyer structure, narrows and creates a conical geometry and that they have accomplished free of any problems the stages of installation, concreting and removal of the formworks used for that comicality. Mr. Gür expressed that since an architecturally brutal concrete face is required for the curved curtain wall of the Triangular Foyer building and for the curtain walls and slabs of its inner, outer and circular conical part, each concreting phase for formwork placements was individually planned and they produced formworks of a special geometry for each of those phases, and went on to say that they kept the deflection tolerance for concrete surfaces below 1 mm by providing different solutions for formwork connections and preferring special steel-surfaced formworks.

Stressing that a majority of those formworks was only used for once, Mr. Gür spoke: “Due to the architectural design of the building, formworks having such a special geometry become unusable for a second time. We at MESA İmalat carried out design and production efforts for about 2 years in the Presidential Symphony Orchestra Concert Hall construction. Particularly for the circular comicality at the integration of the Large Hall and the triangular foyer building, we had very special formwork manufactures. Since the triangular foyer construction was started separately at two sides, they had to join together at the top point, where the two sides were united with an error of 7 cm in total. During this integration, our calculations necessary for the task of concreting the topmost circular conical slab were also very important. For totally there was a weight of concrete and formworks above 80 tons. We also accomplished successfully the operation of removal of special circular conical formworks free of problem after concreting.”

Stating that during construction, they used self-placing and vibration-free concrete and that since it is excessively fluid, they designed formworks accordingly; Mr. Uğur Gür said “So there must have been no gap at formwork splices.” Expressing that the Presidential Symphony Orchestra Concert Hall construction is an extremist project playing with concrete, Mr. Gür spoke: “We at MESA İmalat did a very detailed work at design and production stages and strove for months to determine the splices, horizontal and vertical measurements of the formworks to be used on the project and the locations of rod connections. On this issue, we worked integrally with the contractor’s implementers and the design architecture. As well, when you look at many places of the structure, you can see designs and applications you don’t see in conventional superstructures. Instead of the column and curtain wall-beam system seen in classical buildings, curved columns in the form of a circular fork take place in the Presidential Symphony Orchestra Concert Hall. These columns have been created by employing special formworks designed and produced by MESA İmalat. In conclusion, we have successfully completed the efforts we started in 2011 driven with innovation and in coordination with the contractor, the design architecture and the structural engineer.”